← more from
Whirlwind Recordings
Get fresh music recommendations delivered to your inbox every Friday. 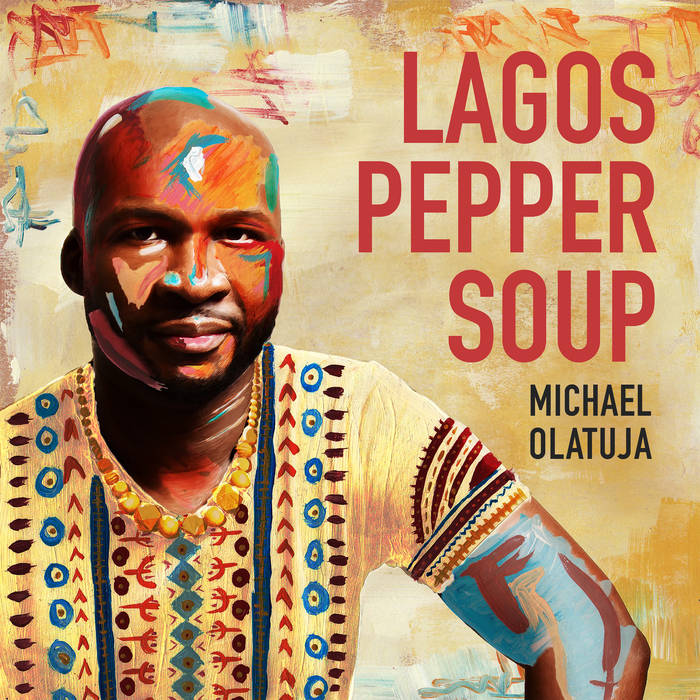 A Soup is right! Honing in on that bass, I can hear funky, progressive, stand-up jazzy, contemporary this-or-that; it lays the perfect, integrating groundwork for the diversity across this album.

Also, I've been really digging on the harp of late, so it's presence in Ma Foya is extra special--it's beautiful work any day of the week, though. Favorite track: Ma Foya (feat. Brandee Younger).

Philip Graham What glorious music from this Afro-jazz ensemble! And what a stellar line-up of guest artists: Angelique Kidjo, Dianne Reeves, Laura Mvula, Regina Carter, Becca Stevens, and Brandee Younger, among many others, each one providing a contribution that seems perfectly attuned to their talents. For grace and power, this recording more than rivals Pat Metheny’s recent From This Place. Favorite track: Soki (feat. Dianne Reeves & Lionel Loueke).

d_a_n_a_c This is beautiful, thanks for expressing this music and sharing it with the world. One of my new favorite albums

imran_mirza Such an innovative and joyful album boasting a stunning all-star cast of musicians and vocalists. Epic in scope and glorious in its presentation. Favorite track: Brighter Day (feat. Laura Mvula).

stmcallister This album is so upbeat and positive! I can't help but feel good every time I listen to it!

Michael Olatuja’s musical development has taken place across three continents, in the heart of three of the world’s greatest cities. After a childhood in Lagos absorbing the Yoruba culture of his Nigerian family, followed by teenage years performing and studying on the booming London jazz scene, Michael’s talent bloomed when he arrived in New York to study at the Manhattan School of Music. His unique breadth of talent, grounded in the strong musical traditions of his homeland, has earned him first-call status across a range of genres from pop to gospel to Broadway to top-flight jazz, and along the way he’s filled his contacts book with a impressive and eclectic range of talent.

For 'Lagos Pepper Soup', his second solo release, Michael picked a core band of Terreon Gully, Aaron Parks and Etienne Stadwijk, and then enlisted the talents of Angelique Kidjo, Dianne Reeves, Regina Carter, Joe Lovano, Laura Mvula, Lionel Loueke, Grégoire Maret, Becca Stevens, Brandee Younger, Robert Mitchell, Onaje Jefferson, and top studio arrangers David Metzger, Joseph Joubert and Jason Michael Webb to realise his vision of what he calls Cinematic Afrobeat - “What you hear is a blend of three major cities: it’s a celebration of life, and I wanted to make it sound like a soundtrack for a movie that hasn’t been made yet - maybe the next Black Panther movie.”

The title track is a summary of what it’s about - the band lay down a cooking intercontinental groove over which Angelique Kidjo delivers a stunning vocal performance: “All these guests are people I’ve worked with, who inspire me and who I consider friends. Angelique has been one of my heroes for many years and working with her was a dream come true. She blew it out the water.”

‘Hero’s Journey’ is the most cinematic track of the album, a through-composed piece inspired by his late Mother Comfort Bola Olatuja, who provided Michael’s first musical inspiration. Top Disney orchestrator David Metzger (Frozen, Ice Age, Lion King and countless others) provided the epic orchestrations and Regina Carter’s improvisation soars over the strings and vocals. ‘Soki’, meaning ‘Soon’ is a Pan-African mix of influences from Mali, Senegal and Nigeria and features Dianne Reeves singing in Yoruba “Man, She did her homework! She put her heart and soul into it.”

Brandee Younger contributes harp to the acoustic textures of ‘Ma Foya’ - “She’s NYC’s premier harp player! We get along like a house on fire - she joked about being left off my album so I got her in and the results were magical.” ‘Brighter Day’ reunites Michael with Laura Mvula and his old London buddy Troy Miller, who he played with in Soweto Kinch’s band, for a typically heartfelt, idiosyncratic piece of pop music.

UK pianist Robert Mitchell was one of Michael’s mentors when he was a 16-year old budding professional. Becca Stevens is the perfect interpreter for the complex sophistication of his composition ‘Home True’. Bola Olatuja is Michael’s mother and ‘Bola’s Song’ is his tribute to her, with Grégoire Maret’s harmonica tracing the melody as the song moves from minor to major in Joubert’s lush arrangement.

‘Leye’s Dance’ is based on the Fuji style from Lagos: Joe Lovano recalls his time playing and hanging with Fela Kuti at The Shrine in this inspired Afrojazz blend. 'Shadows Fade’ is a ballad beautifully sung by Onaje Jefferson - “It’s about being where you need when going through difficult seasons.”

Lionel Loueke contributes the joyous ‘Mivakpola’ “He’s like a big brother to me. We like to have Lagos pepper soup together whenever he’s in town.” ‘Grace’ is an expression of Michael’s faith, but written without lyrics. “All the guests poured their heart and soul into this album, as though it were their own. I feel that grace has been shown to me throughout.”

Michael has integrated all of his diverse musical influences, incorporating his guests’ talents while allowing his own personality to clearly shape the overall direction. His own virtuoso melodic bass playing shines throughout - “I wanted Lagos Pepper Soup to feature my own playing, as well as songwriting and production - all my influences are here, all my favourite musicians, and I feel there’s an element of divine favour in how amazingly it’s turned out."

"Lagos Pepper Soup is an ambitious work of African diasporic jazz. Olatuja’s bass playing throughout the album is vibrant and endlessly creative... A bold and colorful release that comfortably holds space for a rich musical exchange between American jazz and the music of the African continent."
Bandcamp (Album of the Day)

" A thorough command of hard-hitting afrobeat; jazz and funk enables Olatuja to make appealing music that draws a coherent line from the rhythmically and metrically complex to ballads with a soulful and folkish beauty."
★★★★ Jazzwise Magazine (Editors Choice​)

​"Michael Olatuja's most complete and compelling album to date."
Canción a quemarropa

"Bassist Michael Olatuja opens "Lagos Pepper Soup", the title track of his upcoming album, with a flurry of plucked, playful notes, scattered over the track's polyrhythmic backbone. It isn't long before they settle into an upbeat melody, bright and driving: a celebration of life, culture, family, and the many things still worth staying positive about."
Pop Matters

"Afrobeat and jazz set against a tapestry of orchestral arrangements... A sonic experience of epic proportions."
WBGO

"This recording aurally illustrates the places and spaces Michael Olatuja has been, and it forecasts the shape of his Afrocentric jazz to come. The tapestries he weaves are beautiful, complex, and inspiring, demanding repeat listens."
Glide Magazine

"The entire project comes off like an intricate sequence of events celebrating life, love, joy and hope – it’s the type of vision that forever emphasises the importance of a fully-realised album."
★★★★★ UK Vibe

"A rich​ heady stew, but it has the kind of narrative and depth of emotion to make it digestible amid the sizzling rises in temperature. An epic, engaging platter."
★★★★ Jazzwise Magazine (Editors Choice​)

"Lagos Pepper Soup is a fresh and innovative take on the long cross-continental dialogue between Black American jazz and West African popular music."
Bandcamp (Album of the Day)

"A wide range of influences arrive unselfconsciously in the music on these recordings, and both the leaders and their side people are blending them into interesting amalgams that sound perfectly natural and very timely."
All About Jazz

"If you ever needed proof of what an outrageously accomplished talent bass guitarist Michael Olatuja is then Lagos Pepper Soup is that key piece of recent evidence."
Marlbank

"Olatuja has managed to take all those elements - musicians, influences, genres, rhythms, logistics - and, with the help of a clear vision, sparkling tunes and some pretty impressive support, produce a dish which is spicy, refreshing and nutritious."
Sandy Brown Jazz

"At times reminiscent of Jaco Pastorious  and others John Pattitucci’s acoustic work, Olatuja expresses his own individuality while binding together the rest of the compositions."
PostGenre

"LPS is a bold and colorful release that comfortably holds space for a rich musical exchange between American jazz and the music of the African continent."
The Blurb

"A spectacular blend of West African Afrobeats and jazz, backed by a string orchestra."
Presto Jazz

"This project is truly a sonic experience of epic proportions."
NPR

"There's something very orchestral in how motifs are introduced, and swirl through the vocal, string and guitar lines, and finally all come together in a majestic and satisfying way."
Afropop Worldwide

"Even with the thick cast of stars, Olatuja’s bass playing shines throughout."
No Treble

"Certainly a treat for the armchair traveler, anyone with happy feet will know what's going on here. Hot stuff.”
Midwest Record

"The music of Olatuja is the music of celebration, hope and joy, brought out with craftsmanship and drawing from some of the best music heritage of three continents. After a long layover from a lead role, he makes ​Lagos Pepper Soup​ well worth the wait."
Something Else!

"Afrobeat, jazz, bass, a strong cinematographic dimension, an impressive array of guest musicians and singers, an international cast, themes of hope and encouragement: these are the ingredients of the melting pot that is 'Lagos Pepper Soup'."
Citizen Jazz

"Olatuja’s personality shines across all of the tunes to produce a unified whole that is as enlightening as it is uplifting."
Jazz Views

"The musical landscape that Olatuja and his companions inhabit on Lagos Pepper Soup is a joy to discover."
Boston Concert Reviews

"Every single song shines with its own uniqueness."
Musik an sich

The Whirlwind Artist Page for bassist and composer Michael Olatuja.

Bandcamp Daily  your guide to the world of Bandcamp